Less than one hour after leaving Freiburg in southwestern Germany, our train arrived at the station in Basel, Switzerland. This was a moment I had long anticipated. I hailed a taxi outside of the train station, and once my luggage and I were inside the taxi, the taxi driver asked for a destination. “Hotel Krafft“, I confidently replied, and we were on our way. 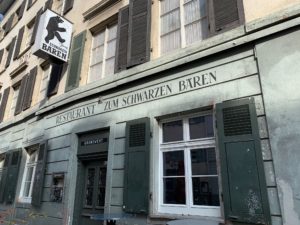 Ernst Krafft was employed in Basel in the restaurant “Zum Schwarzen Bären” when in 1872 he bought three properties across the street, had them torn down, and commissioned the architect Ferdinand Iselin to design a hotel suitable for the times. The new Hotel Krafft opened in 1873, and included both classical features in a 4-story design and a bar in the ground floor facing the Rheingasse. Ernst Krafft went on to build a chain of hotels throughout southern Europe, but only the original hotel in Basel still bears his name.

In January 1924, Hermann Hesse married the daughter, Ruth, of a pocket knife manufacturer, Theo Wenger, and the latter’s wife, Lisa, a designer and author of children’s books. Lisa Wenger resided in the artist’s colony Carona in the Swiss canton Ticino, and Hesse had already known her for years. Ruth was taking singing lessons in the middle-1920s and lived on the top floor of the Hotel Krafft, together with her cat, dog, and parrot.

After a few minutes, we stopped directly in front of the imposing facade of the hotel, which I immediately recognized from the photographs I had seen in Hermann Hesse biographies. I climbed the few short stairs from the street, entered the hotel, paused a moment to look around, and then turned right to the reception desk. The receptionist greeted me warmly, gave me some information about the hotel and about Basel, handed me the key to my room, and guided me to the tiny elevator.

Hermann Hesse’s marriage to Ruth Wenger lasted just three years, but was a turning point in Hesse’s life as a writer. It was in the Hotel Krafft, in today’s room 401, that he worked on one of his most famous novels, Der Steppenwolf, which was partially inspired by his adventures in Basel’s bar scene. Hesse completed the novel in Zurich and had it published in 1927, and the novel was influenced by the despair and isolation Hesse felt as his relationship with Ruth collapsed.

I found my room on the third floor of the hotel, almost directly underneath Hesse’s, and settled in. Taking in the panoramic view of the Rhine River and city of Basel right outside the winter, I could almost feel Hesse looking out the window above mine as he worked on his novel. Of course, my room was equipped with the completed, published version of Der Steppenwolf, a hardcover edition of which was thoughtfully placed next to the bed by the hotel management.

More than thirty years after the novel’s original publication, Hesse wrote in a preface to a 1960 republication that Der Steppenwolf was “more often and more violently misunderstood” than any of his other books. Hesse felt that in concentrating too much on Harry Haller’s suffering and despair, his readers were missing the possibility of transcendence and healing. By 1960, Hesse had found healing in his third marriage to Ninon Dolbin, with whom he lived until his death in 1962 at the age of 85.

Later in the evening, I met a friend for a beer just up the street before returning to the Hotel Krafft for the night. As I lay in bed, I was not certain if I could hear Hesse’s voice mingling with the many other voices in the streets below, or if I could hear him quietly working on Der Steppenwolf one floor above me.